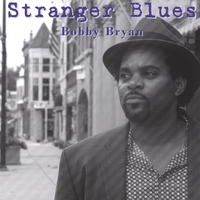 Or listen to more tracks below

Blues Revue, April/May 2008
"Bryan is a serious, thoughtful songwriter with a sweet ache in his voice that recalls early Robert Cray. His guitar playing is crisp, clear, and wiry, with elements of rock and jazz. Stranger blues should open doors beyond the Upper Midwest for this artist whose potential seems unlimited."--Thomas J. Cullen III

Juke Blues 64
"His confidence as an artist has to be admired, laying himself open with his music, just as would be hoped of any true bluesman. His singing, occassionally reminiscent of Robert Cray, is soulful yet controlled and capable of conveying emotion, tenderness, and power. Similarly, his guitar voice does everything sought of it, his playing always vibrant, spontaneous and adventurous, taking many of the tricks of the psychedelic guitar-slinger's tool bag and applying them to some exceptionally emotive playing on a series of blues ranging from the traditional blues-soul to funk-rock."--Mark Harris

Living Blues, December 2007
"...this is a strong debut by an artist who seems to have the talent to move on to national recognition."--Jim DeKoster

Blues and Rhythm, November 2007
'Stranger Blues' is Bryan's self-produced debut CD, and a very promising effort it is. He gets around the guitar agilely, ably contrasting more lyrical, linear playing with fat, Hendrix-y fuzztones. Press stories mak comparisons with Robert Cray, and 'Save Your Tears', rejecting a woman who wants to be taken back, certainly recalls Cray's preoccupation with wrecked relationships; but although influences are, of course detectable in his music, Bryan is an individual, original voice."....'Stranger Blues is a striking debut, and I hope--although with no great confidence, given the current state of the industry--that it opens the door to a recording contract. It is certainly well worth hearing"--Chris Smith